OK! Mozzarella was a success.

Eight ounces of cheese, close to half a gallon of whey left over. Don’t throw it away! 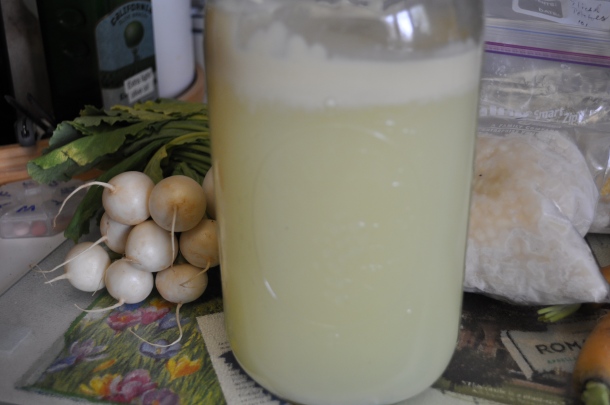 Instead, make soup with it. All from the freezer and fridge. Potato corn chowder. Look into the crock pot. Frozen foods in it.

I dumped about two pounds of Yukon Gold CSA potatoes, boiled, sliced and frozen in October. And, about 10-12 ounces of sweet white corn from TLV, blanched and cut from the cob. The corn is the blob on the right bottom of the pot. All the whey in there.

Plus, green beans from the CSA. Turnips from East Rivendell (they buy wholesale from Lancaster Farm Fresh). Greens and turnips. Baby Hakurei turnips. 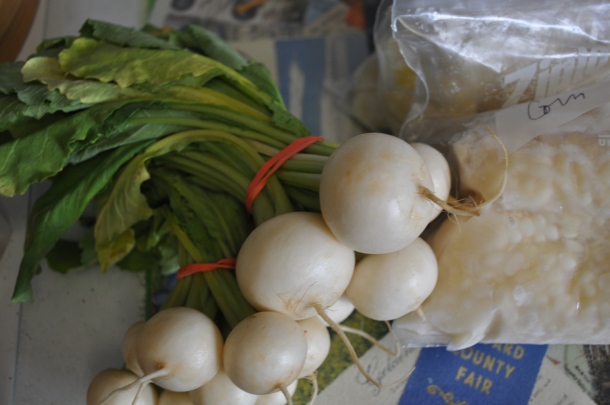 Added some scallions and carrots. Carrots from Breezy Willow. Scallions bought at England Acres when I picked up my half a lamb (another topic for later this week). Oh, and some of that bacon from TLV bought Saturday.

Popped some basil from my new plants in it. Some veggie blend from dried herbs. At some point, I fished out the potatoes and pureed them in the blender. Salt and pepper and garlic powder to taste. This came out very well. Rich satisfying soup.

Served with a salad medley. And, a lovely white wine from Linden.