My first spring garden is well underway. Since we decided to go the route of joining the community gardens and buying row cover and hoops to construct a “low tunnel”, we will be planting and harvesting vegetables that I didn’t do in our yard. 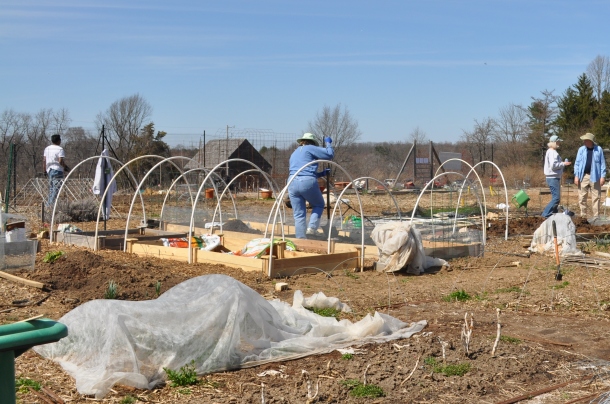 The PVC hoops are the bigger version of what we will be doing. We are using a steel hoop that digs into the ground. The lightweight row cover in the foreground above mainly protects against frost, but is a deterrent for rabbits and other pests. We bought a heavier weight cover, which is a little more resistant and not prone to tearing in high winds.

Over the next few days we will be tilling a 3′ by 20′ row, then putting newspaper under the soil conditioners and mounding the amended soil above it. We will then insert the hoops along the row and fasten the cover.

Our plot has a drip irrigation system that we have to hook up to use for watering, so I don’t have to remove the cover to water.

Over the next couple of days, we will also be buying onion sets, some rhubarb plants, and I think I might venture into trying some horseradish root. There will be kale, mesclun, arugula and Swiss chard.

I think that’s enough for right now. I intend to plant three rows for the summer garden. One totally tomatoes. One peppers, edamame, eggplant and tomatillos. Lots of herbs. Some pole beans and the Malabar spinach. Crossing my fingers for a productive summer.

On the home front, an expanded herb garden, with parsley, dill, cilantro, chives, sage and basil. Planting potatoes too. And later this summer, trying a few fall pumpkin vines. Hey, why not experiment?

Plus, I need to get these plants out of my kitchen. They are out of control.