Day Tripping, that is.

Including some updated pictures from Turf Valley. We had a lazy day, that started with a trip to the landfill because the recycling truck came three hours earlier than usual. Which meant we missed it.

Before hitting the landfill, I went into Towne Square with the good camera and shot more pictures. And we picked up tuna subs from Subway before hitting the road to Thurmont by way of Frederick. More on that later.

First, Towne Square. There will be the following restaurants and food places.

Facci, which we mentioned before.

From views of the fenced in areas, it looks like there will be outdoor dining in front and on the side where the fireplace is located.

Mimi’s Kabob is on the far side of Harris Teeter. I didn’t get down there for pictures.

As for fast food, the Subway and YoLaVie, yogurt are on the left in the way in.

The woman in Subway who waited on my husband while I was wandering around taking pictures, said Red Parrot will be an Asian restaurant, but today no activity found there.

Not much going on at Xitomate and Grille 620 either. Only Facci and Petite Cellars had lots of trucks and equipment outside.

We left the landfill today to head off to find Big Cork Wines to take to a family reunion in two weeks. I wanted to take a local wine, and only two liquor stores stock Big Cork. Both of them just outside the Wegmans location north of Frederick.

I wanted some Traminette. A relative grape of Gewurztraminer. A good all purpose white that will please a crowd. We found ours at Riverside, just south of the Wegmans complex off Monocacy Boulevard.

We then headed out to Thurmont for a ride. Looking to take pictures. And finding one of the six remaining covered bridges in Maryland. Just north of Catoctin Mountain Orchards, at the intersection of Roddy and Roddy Creek Roads. 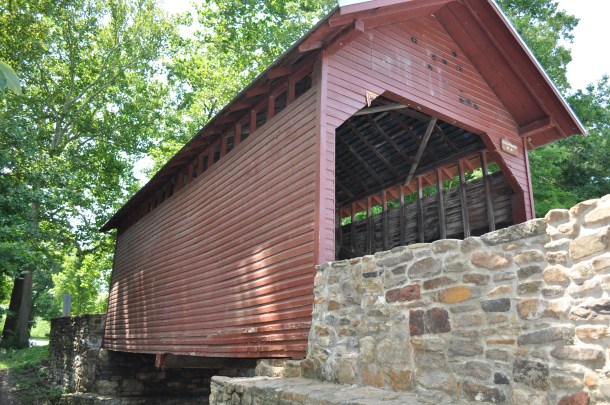 I was looking for honey bee pictures. Working on the theme for next year’s County Fair special category.

We were also looking for farm country pictures to use on my husband’s design for his amateur radio cards to exchange for confirming a contact with another country. He wants fields and farmland. I took a few north of Catoctin.

The benefits of retirement. Tuesdays free to wander all over the area.

I have to admit though, it will be nice to have a big choice of restaurants right up the road.