… for picking peaches. Oh, and Blackberries, too. At Larriland.

I dropped my husband off at his monthly Glenwood DX Association radio group’s luncheon at Town Grill in Lisbon, then headed off to pick blackberries. 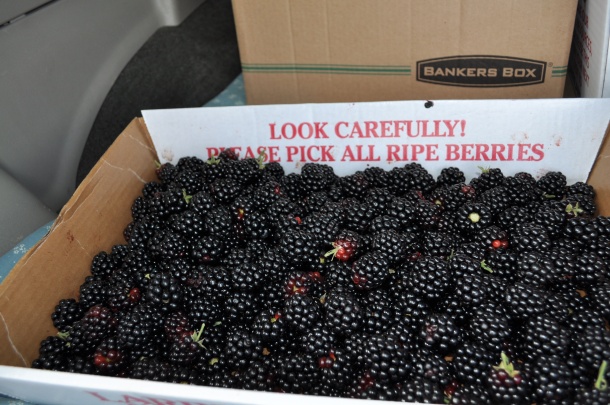 An hour or so later, and five pounds of berries in the back of the car, I picked him up so he could help me pick peaches. Twenty seven pounds of peaches in less than 20 minutes. 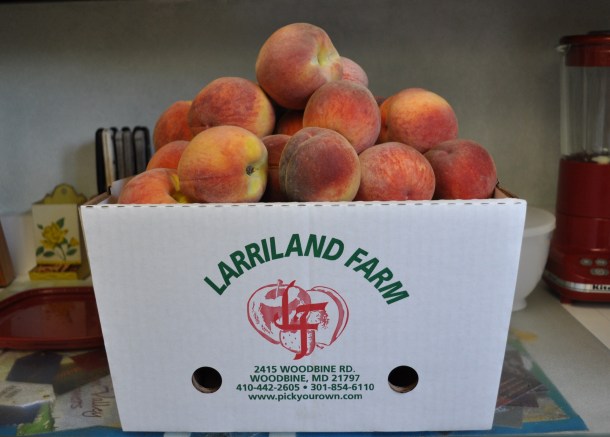 Gorgeous peaches at $1.25 a pound if you pick more than 20 pounds. Tomorrow will be peach blanching, freezing and blending day.

The weather was perfect. There were lots of people at the peach picking sites, but I had most of the blackberry bush area to myself. My own row, as a matter of fact.

After a stop back at the red barn to get some canning supplies, an eggplant and a couple of red peppers to top off the ajvar, and home to process berries.

The best berries go into the freezer whole, are flash frozen, then packed in small bags. I got eight bags with about a cup of berries in each one. The ones on the top left are the less than perfect. I will drop them into boiling water briefly using a strainer, then put them in the blender with a little honey and just a touch of balsamic. They will be strained into syrup then put in an ice cube tray to freeze. The basis for vinaigrettes all winter. The top right are the “Eat Now” berries. For cereal. Yogurt. Salads. Snacks. They will be gone in two or three days probably, they are so good.

As for a few of the ripest peaches, they became part of dinner tonight.

Right on the grill with lemon olive oil and balsamic glaze.

Served with some Breezy Willow kielbasa, a local wine from Big Cork, and some pesto pasta salad.

Head on out to Larriland. The peaches and blackberries are down the road from the farm entrance (stay on Rte. 94 south) and a right turn into the picking areas.