My father came from a large family. On his mother’s side there were seven children, she was the oldest.

My dad was the oldest of 16 cousins in his generation, children of the seven brothers and sisters.

On his dad’s side, it was more complicated and not as close knit. But, his mother’s family held annual reunions on Father’s Day. Below was one of the reunion shots from about 50 years ago.

Most of the young men in that picture were my dad’s cousins. His great grandfather was married, had three children, was widowed, married again quite a few years later, and had four more children. It ended up that my dad has an aunt who is younger than him.

In other words, as a child at those reunions, I was really confused. My dad had cousins close to my age.

This weekend, my dad’s youngest brother contacted and organized a reunion of almost all the living cousins. We were missing just a few of them.

Today at the reunion it hit me. I am the oldest of the third generation. We have one family member left of the first. My great aunt, the one younger than my dad. She was there. More than half of his cousins made it, many from Florida where they retired. Quite a few do still live in the area, but most have moved south.

One of my favorites of the pictures I did take. The after shot of the cousins, after they all posed nicely to be photographed.

As for my generation, there were a half dozen of us who still live around here and came to my cousin’s house here in the county. I am lucky to have close relatives in the area, with a number of us living within 30-45 minutes of each other. Four of the five first cousins, the children of my dad and his brothers. The picture here was me with my uncles including the one who organized our reunion. 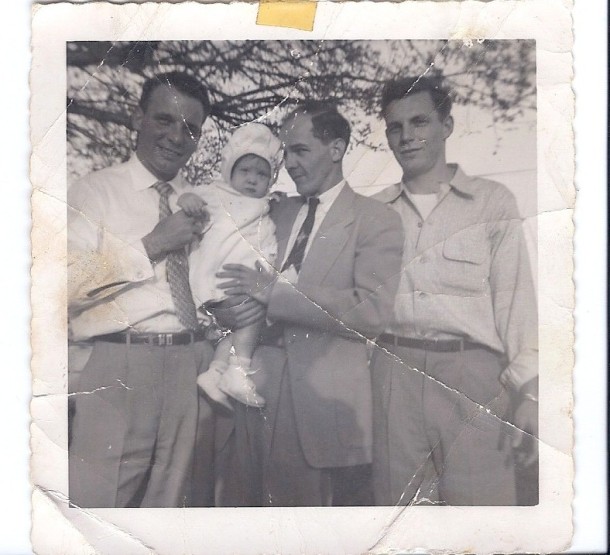 Today, since everyone loved to take pictures, there were lots of “formal” group shots taken by a neighbor. They will get emailed or sent by snail mail to the generation not plugged into the internet (like my mom).

It was great to see everyone. Our last big family get together was my dad’s funeral ten years ago. The after service get together then was my cousin’s house, so it was good to get there under happier circumstances.

We hope to have these get togethers more often now that quite a few of us have retired. We don’t want to only see each other once every 8-10 years.

And, in keeping with the spirit of our heritage, we did have crabs and beer. A fuzzy shot taken with the tiny camera. I didn’t do much picture taking. I was too busy catching up with those who watched me grow up.

Retired, I am following my dream of living in quiet west Howard County, a rural oasis, not far from the urban chaos, but just far enough. I love to cook, bake, garden, and travel. I volunteer at Howard County Conservancy. I lead nature hikes, manage programs and show children all the wonders of nature, and the agricultural connection to their food.
View all posts by AnnieRie »
← Picking Fruits and Veggies
Mostly Local →