Yesterday before sitting down to watch the Super Bowl, I put up a quick post without the recipe for my venison chili. This time it had less local items in it than I normally use, but I wanted to try these products out. I also have been trying different spice combinations and different textures for the chili. The first batch of chili I made in December when we got the venison delivered.

This time I put everything but the venison in the crock pot set for eight hours on low. I wanted to brown the venison in a pan on the stove with spices and add it halfway through the cooking. The venison is very finely ground and really almost disappeared in the earlier version. Venison is such a lean meat, I am learning how to treat it to get the best flavors.

I also played around with the ingredients. I used the last of a bag of sweet corn from the freezer as well as using a frozen jalapeno and grated carrot.

I started out with a can of Rotel diced tomatoes with cilantro and lime as a base. Added 12 ounces of tomato sauce from my freezer (made in August from my Amish tomatoes). Added one green pepper, bought at Roots. Added one large onion, diced, one of the last of my CSA sweet yellow onions. Put about six ounces of the sweet corn in, too.

Then, I got to grating, one small frozen carrot and one frozen blanched jalapeno. 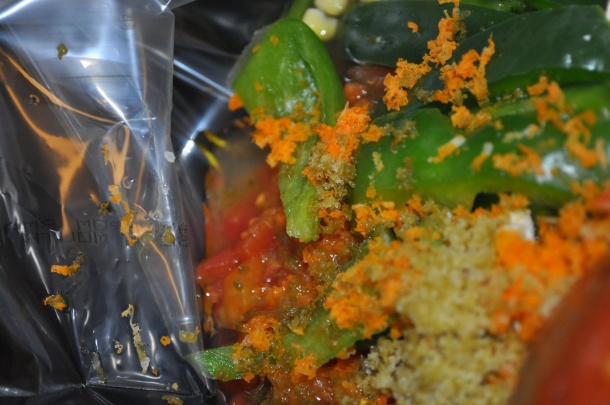 The carrot adds that touch of sweetness. The jalapeno, grated, allows you to determine how much heat. A frozen jalapeno can be grated using the zester, and you can avoid all the seeds if you wish.

Use the tip of a knife to scrape all the jalapeno “zest” into the pot. I then added a large can of organic black beans with their liquid. My spices this time omitted cinnamon. I used chili powder, garlic powder, paprika, cayenne and white pepper. Lots of garlic powder this time. I also used cilantro. And, of course, salt to taste.

The venison went into a large pan to brown. A touch of grapeseed oil to keep it from sticking. Add garlic powder, salt and pepper while it is browning. 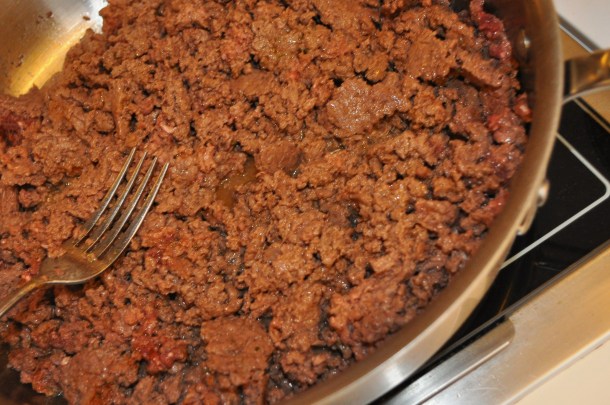 I strained it before adding it to limit the amount of fat in the crock pot. The chili when it was almost ready to serve looked like this.

My husband liked this version better than the first version in December. He specifically requested that I don’t use cumin or cinnamon, but keep it on the simpler side of spice.

But, he also suggested that I next time I should try using chipotle. After all, you can always tweak a good chili recipe.

Retired, I am following my dream of living in quiet west Howard County, a rural oasis, not far from the urban chaos, but just far enough. I love to cook, bake, garden, and travel. I volunteer at Howard County Conservancy. I lead nature hikes, manage programs and show children all the wonders of nature, and the agricultural connection to their food.
View all posts by AnnieRie »
← Eating Locally: The Big Game
Snakes in the Grass? →