RSS Feed
← The Fall CSA, Three Weeks In
The End of the Season →

A Trip Down Memory Lane

I have been working on a series of posts about life in Howard County. We are cleaning things up and whenever I find something from years past, I think: I should do a post about this.

So, I am. The trigger for this post was the cleaning in the files in the study and finding a box in the corner with old ADC maps in it. There must be five different Howard County maps in there, but my favorite is this one. 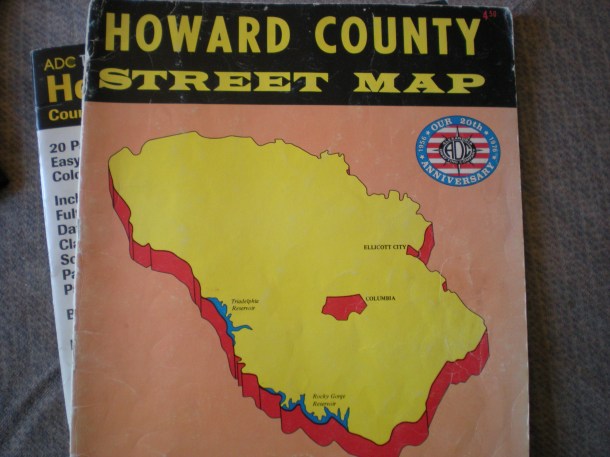 In 1975 I moved here, right out of college. My husband moved to his place in 1977, before I knew him. This is his map, bought to find his way around here, since he used to live in Montgomery County, where he worked.

Interesting little things from the index, like the total number of schools in the county then. Germane to see how many fewer schools there were back then, when the entire county probably had less population than Columbia has now. Columbia back then was just a small percentage of the land.

The shopping center list was pretty sparse as well. It shows four village centers for Columbia.

One of my favorite pages is the one of Clarksville, before River Hill. Notice that the old Rte. 32 jogged right then left around Rte. 108. No highway then.

My first roommate when I lived in Wilde Lake worked here. Who remembers this? What is there now?

I moved to Columbia hoping to find a job at APL, but the recession of the early 1970s made it hard. I taught school for a while at a Catholic school, and lived with multiple roommates in Partridge Courts, then in an apartment in Long Reach. My husband’s townhouse was one of the Howard Homes camp out town houses in Owen Brown. Remember those?

Thirty years I lived in Columbia. Half my life, as I turn 60 next month. It was definitely an interesting place to be, but now I have to admit I far prefer leaving a city to live in a mostly rural area. I realized that after 22 years in Baltimore and 30 years in Columbia, that these last eight years were the only time I didn’t live in an apartment or row house, fashionably named town houses somewhere along the way.

Anyone else have older Howard County artifacts or photos around?

Retired, I am following my dream of living in quiet west Howard County, a rural oasis, not far from the urban chaos, but just far enough. I love to cook, bake, garden, and travel. I volunteer at Howard County Conservancy. I lead nature hikes, manage programs and show children all the wonders of nature, and the agricultural connection to their food.
View all posts by AnnieRie »
← The Fall CSA, Three Weeks In
The End of the Season →