Tomatoes. The reason I garden.

This year I concentrated on heirlooms. Which didn’t do very well, but I did make it to the century mark. 100 pounds of tomatoes by last Tuesday. With a few pounds of green tomatoes still hanging out there. Third year in a row to pass the century mark.

I dedicated about 100 square feet to tomatoes. ROI, a pound a square foot.

This year I did eliminate roma/paste tomatoes from my plantings. Deciding to rely on Larriland Farms, pick your own, to supply me with tomatoes for freezing. Last Saturday, me and hundreds of other people descended on the farm. Most of them looking for apples and pumpkins. Me, looking for tomatoes.

If you could make it through the parking lot to the area for picking tomatoes, you didn’t encounter any crowds. Down beyond the beets and the broccoli, the last tomato fields are open. Just a few weeks left to pick. Prices are amazing. $1.49 a pound for less than 20 pounds picked. Price drops to 75 cents a pound for more than 20 pounds. I picked 26 pounds. 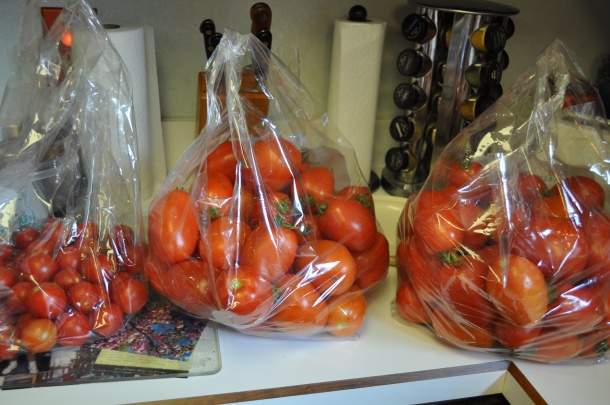 Almost 24 pounds of paste tomatoes and almost 3 pounds of Campari. It was sauce making and oven roasting time, for three days total, at my house this week. The freezer is getting full. Winter will have tomatoes on the menu.

They suffered a bit from the strange weather. Lots of cracked tomatoes. Just like what I encountered in my heirlooms in my garden. 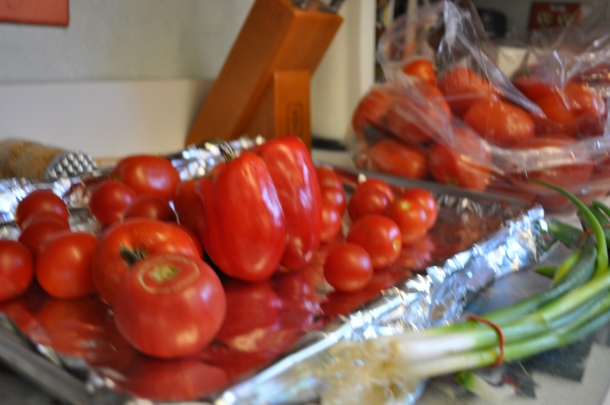 Many of the Campari were destined for the roasting tray. This batch was tomatoes, a red pepper, scallions, olive oil, oregano, sugar, salt and pepper. Slow roast at 250 degrees. I ended up with a total of four trays of roasted tomatoes. One with the Campari and three with the paste tomatoes. When I use the paste tomatoes, I slice them in half or in thirds, depending on their size.

As for the bulk of the paste tomatoes. Three different batches of sauce. Each yielded 2 quarts.

I blanch them first. Remove skins and seeds after they have cooled. In the meantime, I prepare the base.

Onions and carrots first. Sometimes I add green pepper. Always I add minced garlic right before I start putting tomatoes in the pot. 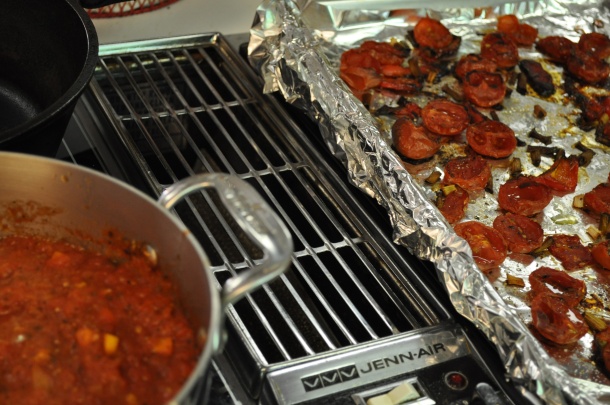 A tray from the oven, and a finished sauce. My sauce is simple. Just add a pinch of sugar, some salt and pepper and oregano. I like it chunky. Like this.

The pasta. From Boarman’s. Called Al Dente. It’s an egg enriched pappardelle. It’s hanging by the butcher case. The sausages. One was hot Italian, the other sweet Italian. I ask the guys at Boarman’s to give me one of each and use them for my Italian meals. Mixing them.

As for that days work.

Ready to transfer to the basement freezer. Yep, it took three days total to process the $20 worth of tomatoes I picked. Yield. Four jars of roasted tomatoes. Six quarts of sauce. One was eaten. Five in the freezer. Not a bad value.

Retired, I am following my dream of living in quiet west Howard County, a rural oasis, not far from the urban chaos, but just far enough. I love to cook, bake, garden, and travel. I volunteer at Howard County Conservancy. I lead nature hikes, manage programs and show children all the wonders of nature, and the agricultural connection to their food.
View all posts by AnnieRie »
← Fall Festivals
Soup Season →