Growing your own food you quickly realize that ugly food is the norm when you have Mother Nature and a host of insects and small critters feasting when you aren’t looking.

I have gotten used to cutting out nibble marks in cucumbers. Ignoring the stink bug marks on tomatoes. And, reconciling myself to holes in the greens.

Still, I am always amazed when someone rejects great tasting food, fresh and just from the ground, because of imperfections on the surface.

In the past year or so, I have encountered this aversion to ugly food at farmer’s markets. Larriland. Food bank gardens. My mother (yes, mom, who didn’t like the dark spots in my potatoes).

I think too many people have become so enamored of those waxed vegetables in the supermarket. The blemish free fruit. They surely realize, I hope, that they drive up the cost of food. 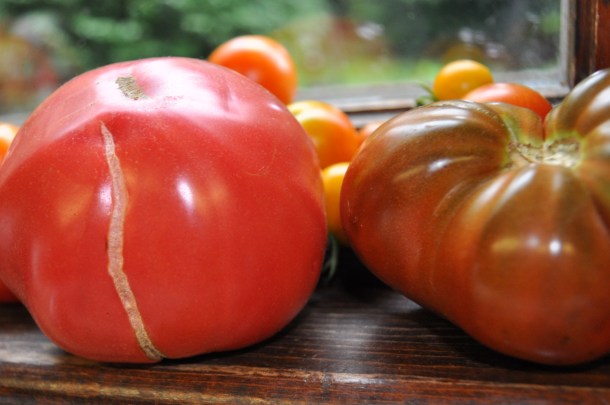 Heirlooms can be really ugly. But they have incredible taste. They will split, look deformed, and pretty much become the ugly ducklings on the farm stands. Last summer, we picked some beautiful heirlooms one Sunday morning volunteering at the Community Action Council’s garden. Many were rejected as being not good enough in appearance to take to the Food Bank. We were offered those tomatoes to take home with us or they would go into the trash piles. To me, throwing away good food is a crime, but since I grow my own and get lots of other varieties from my CSA, I didn’t need to take more on.

A few volunteers did take them to make tomato sauce. Who cares if they are split if you are going to simmer them down to yumminess.

I thought also about those gorgeous red fig tomatoes I grew a few years back. Grown at the historical gardens at the Conservancy. I bought a few plants at their plant sale to put in my own garden. Loved them. 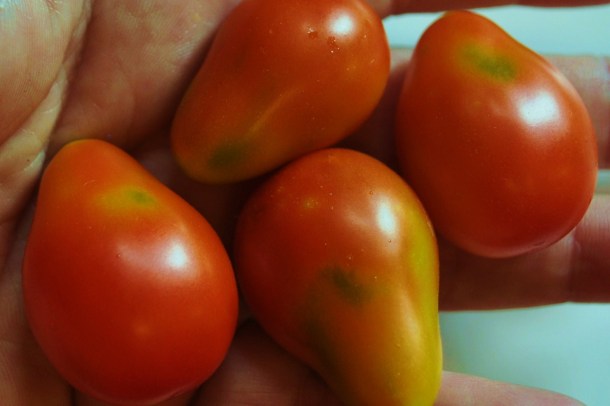 The Food Bank said they weren’t popular. They were discontinued in the garden in 2013. These little gems were so sweet, so concentrated, but they aren’t familiar so they weren’t taken.

As for Larriland, I can’t believe the amount of food that is left on the ground. Mostly because it was picked but not perfect, so it was tossed. Berries. Tomatoes. Peaches. Apples. The list goes on.

No, I am not talking about fruit that falls off the vines and the trees. You can’t help but see people in the row across from you, picking things and dropping them because they have flaws. Or, aren’t ripe yet. The waste of food boggles my mind sometimes.

With strawberries, the imperfect ones still go in my basket if I picked them. They become the basis for my strawberry ice cubes. Cutting the blemishes out. If you grew them yourself, you would use them. I can’t get past this obsession for flawless food. No wonder prices keep rising.

I know I don’t hold the same views as people who believe it must be perfect if they are paying for it. At least these days those less than perfect items get used for the soup or salad bars, or in any of those prepared foods on those food bars in places like Wegmans. There you can pay $8 a pound for veggies and fruit that would have cost $2 or $3 a pound if you bought them raw.

Unfortunately our farmers at the markets don’t have that luxury, as foods that aren’t bought become feed for their animals, or hit the compost pile.

As for those potatoes my mother didn’t like. They had small blemishes on the surface that translated into dark spots inside. You had to cut them out. The potatoes. Heirlooms. Blue or purple or pink. With amazing flavor. Just ugly. 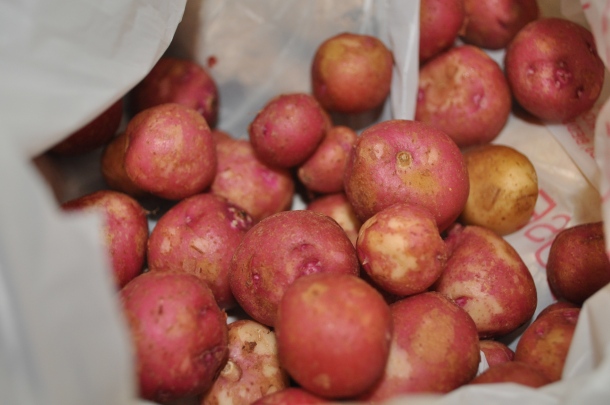 Do me a favor. Buy some ugly duckling items at the bargain prices the farmers charge at the markets. Give them some love and a little time. The freshness of the product is worth the small loss of a fraction of an ounce for cutting out the blemished spots.