No Room in the Fridge

Seemed to be that way today, so I had to get cooking and empty those produce containers and bins to get ready for tomorrow’s CSA pick up. We are doing fine with the fruit, the bread, almost OK with the eggs, but have too many veggies in there at the moment.

Time to cook it down to a manageable level. Soup and stews and stocks are my biggest veggie consuming recipes, so today I am working in that realm. First off, I decided to make Tuscan bean soup, and include the lacinato kale left from two weeks ago.

Start out with bacon. Boarman’s thick cut bacon. I buy it by the pound and freeze it. Take it out. Cut off the end, or two whacks. Put it in the pot with scallions and olive oil. Let it get all nice and curled up before adding some liquid. Today I am using an organic mushroom broth for the soup base. Here is what it looks like before adding the rest of the box of broth, and then adding the kale and beans. 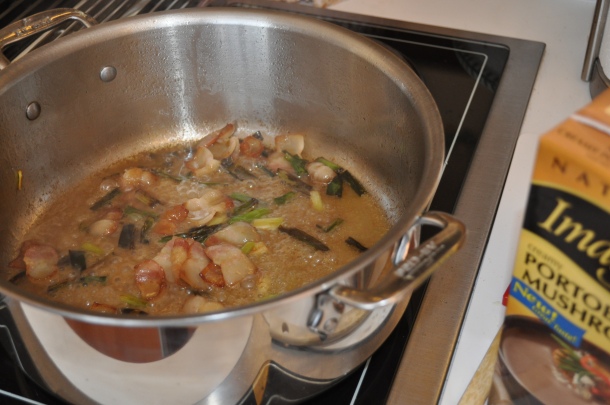 I used two cans of beans, Great Northern and Butter beans. All the kale from the CSA. With the quart of mushroom broth, some seasonings like garlic powder, salt and cayenne flakes, that is all I put in the pot to make this soup.

The kale is still lovely, crispy, fresh and green even after two weeks. Really fresh veggies from the Breezy Willow CSA will last two weeks if you store them in a crisper, or a salad spinner. After cooking, I divided the soup into two containers. It is really thick so when I heat it up I will be adding a splash of chicken broth to thin it out.

As for the rest of the fridge, I did roast some other veggies to use in two recipes. The acorn squash, a sweet potato and two carrots to make hummus tomorrow. Plus, two turnips, two white potatoes and a handful of Brussels sprouts to use to make colcannon tomorrow night for dinner. The before and after pics will be used in tomorrow night’s post.

I got quite a bit out of the fridge today, leaving only a few turnips, carrots and potatoes around. Tomorrow the new veggies will go well with these for some interesting recipes. I will have to hard boil some eggs this week for egg salad, but the week before Easter we don’t get eggs, so I should come out OK in the egg department.

Still loving these early spring and leftover winter veggies from the CSA.

Retired, I am following my dream of living in quiet west Howard County, a rural oasis, not far from the urban chaos, but just far enough. I love to cook, bake, garden, and travel. I volunteer at Howard County Conservancy. I lead nature hikes, manage programs and show children all the wonders of nature, and the agricultural connection to their food.
View all posts by AnnieRie »
← Local Food Challenge Theme Week
Early Bird CSA Week Three →