My View from West County

Boy, we have become popular lately in the blogosphere and the news. Between zoning issues, crime, preservation of farmland meetings and today’s closure of Rte. 32 because of the fatal accident for how long?, 5 or 6 hours, there are links and articles and comments everywhere.

This was our view at 9:30 this morning when I knew something major was happening.

solid line of traffic stopped in front of our home

Since some people have GPS with traffic avoidance, they know how to get around closed roads by going on really unacceptable alternatives, like us, in the middle of nowhere. Once I fired up the iPad app for maps and turned on traffic, most of my area went into the red zone. And, not in a good way. Seems like the back ups were so bad, they were bailing on alternative alternatives, like our street. The four way stop in “downtown” Dayton must have been a real picnic.

At 11:36 I tried to get the mail while taking the blue bin down. Remember, we live on a rural road. Mailboxes on one side of the street, not on our side for us. Thirty mile an hour speed limit that only the locals obey (sometimes). Most people think 50-60 is OK, and we live just over the crest of a hill, so we are blind to the right to the speeding crazies coming over it.

These next two pictures I took to show how nuts it gets out here at times. Left and right. The same minute on my time stamp. 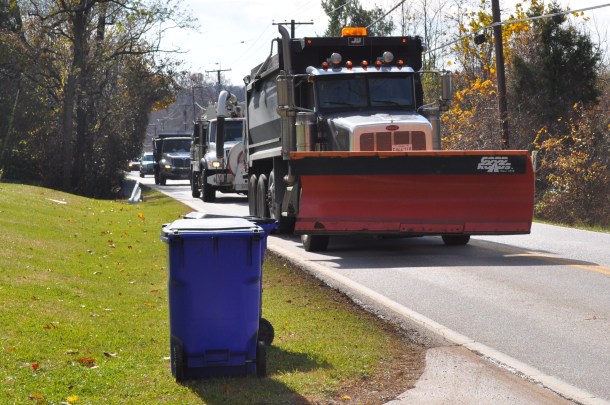 I was standing in our driveway. If I wanted to cross and get the mail, I couldn’t. We ended up going out after they re-opened 32 and got our mail. These roads can’t handle that kind of traffic. But, it happens often now. If I come off of I-70 onto southbound Rte. 97 and program the GPS to take me home the shortest distance, it will take me to McKendree, then Hobbs, then Burntwoods, then Shady/Sharp, then Linthicum to Ten Oaks and down through Dayton. so, people today programmed their GPS units and used all our little rural roads to commute.

Before GPS, people would have no idea how to use our back roads as shortcuts. Why do I write this now? Because there have been numerous articles about West Countians opposing a Mosque on Frederick Road right across from where McKendree comes out, west of the Fairgrounds and east of 97.

When I first moved here, I didn’t get it. I thought it was quaint, interesting, slow moving and pretty nice. I never thought we had traffic nightmares during large events or accidents, We also were certainly not aware of how power losses affected us. And, they do. Big time!

I did learn when to avoid certain roads that were insane during commuter hours. Shortcuts that commuters use to avoid the backups on 32. People who don’t live here and who are commuting will rip through at up to twice the posted speed limits. Many of us have witnessed bad accidents. Why? No shoulders. Blind corners and many, many hills. Recreational bicyclists. Recycling trucks. Trash trucks. People ripping around them with no vision of what comes around the bend or over the hill, causing accidents.

I witnessed two. One from my mailbox taking out a blue bin and a mailbox up the road, and one on Triadelphia taking out the car in front of me. Almost head on. Swerving back but taking out the front quarter of both cars, putting one in a ditch and the other disabled.

I can’t even count the number of times there are tire marks on our front lawn that show a maneuver to avoid hitting something or someone. If you are caught by our mailboxes, sometimes the only option would be to jump down the hill to the meadow of our neighbor. This is his mailbox, the fourth one since three of them have been destroyed in the eight years we have been here.

My neighbors in west county mostly don’t oppose some “hustle and bustle”. They oppose growth beyond what the infrastructure can handle. The infrastructure out here doesn’t have underground utilities, so lots of extended power outages.

No public water or sewer. We are all on well and septic. If the power fails, the water doesn’t pump from our wells. The four or five gas stations that service this area run out of gas and diesel for the homes that have generators, if those stations themselves even have power. The only reason we got power restored after the derecho was because West Friendship and Glenwood ran out of fuel and they needed to restore power to Royal Farms and Shell at the Glenelg circle to fuel utility trucks and generators.

We learn to be pretty self sufficient out here. Buying and using generators and UPS units. Stocking water in tubs to “flush” toilets. I can’t imagine condos like those proposed for the Cooksville development figuring out how to carry gallons of water up into their seven? story high units to make their “poop” go down the toilet. Some of our friends and neighbors out here were without power after the derecho for almost a week.

No water for that long. Power outages most of us can deal with. Water, now that is a major concern.

So when people say those of us out here object to a major influx of people on a site because of their religion don’t get it. If you haven’t lived out here, you won’t. It has nothing to do with religion. It has to do with understanding our environment.

I can’t speak for my neighbors but we personally would have no problem with a large church or temple or mosque or synagogue or whatever developing a campus out here if we had city water, sewer pipes, underground utilities and roads around us that handle traffic. Roads like they built when Columbia got bigger. Little Patuxent, Snowden River, Broken Land and an expanded Rte 32.

Otherwise, it will become even crazier, and what if a few bicyclists, or trash contractors, or school children from a school bus are injured or killed because the roads out here are already way beyond what they were designed to handle, then maybe people will understand that it is different out here. The thought of 2500-5000 people coming to a place on a regular basis scares us not because of who they are, but the alarming number of them and their cars.

If everyone who thinks we are the problem wants to pay to upgrade the area to the equivalent of Eastern Howard County, you know, laying miles of sewer pipe, water pipes, putting in pumping stations, underground utilities, etc. etc., then sure, some of us would no longer oppose higher density. Higher density without the infrastructure is crazy. I personally don’t care who you worship or how. Many of my neighbors feel the same way.

Retired, I am following my dream of living in quiet west Howard County, a rural oasis, not far from the urban chaos, but just far enough. I love to cook, bake, garden, and travel. I volunteer at Howard County Conservancy. I lead nature hikes, manage programs and show children all the wonders of nature, and the agricultural connection to their food.
View all posts by AnnieRie »
← Shirt Sleeve Weather
The Value of Our Fall CSA →