The new store in Columbia Mall. My husband was there Friday and picked up some of the Pappardelle pasta I have found to be so good, and so versatile.

This is the peppercorn trio lasagna noodle. Let’s say it amazed me, as it expands during the cooking. It gets wider so I only needed four of the six noodles I boiled.

These noodles, along with some homemade sauce with hot Italian sausage became the base for my latest venture into different lasagna recipes. 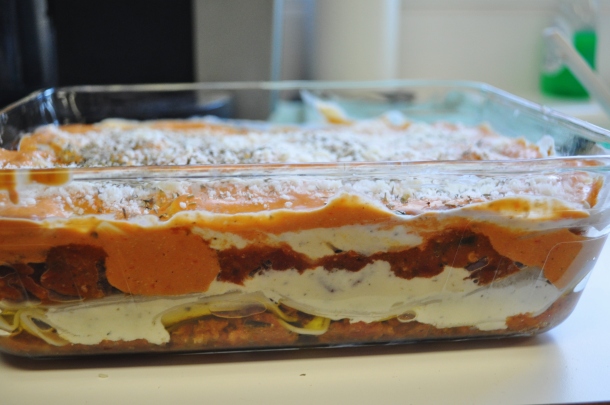 And, by base, I mean the bottom two layers. I ran out before I got to the top so I improvised. I had some vegan roasted pepper sauce from Roots in the cupboard so added that on the top layer.

We served it with a simple green salad, and a very nice Breaux wine. The “Trilogy”.

This was my Sunday “Eat Local” dinner. Much of this meal came from my freezer and fridge.

The sauce. Made with Larriland tomatoes. Copper Penny sausage. The last of my CSA onions. I put all three in a baking dish yesterday and slow roasted it until the sausage fell apart, the onions almost disintegrated and the tomatoes could be pureed. I then added a can of San Marsano crushed tomatoes and a cube of my pesto. To make a sauce.

Cooking from the freezer.

As for the cheese portion of the lasagna. Bowling Green Feta, chopped in the food processor. Chevre bought at Breezy Willow. One of their eggs. A splash of Trickling Springs milk. Pecorino Romano. Mixed up. I just eyeballed how much milk I needed to get it creamy enough to spread.

If I didn’t have those extra noodles, I would have been fine, but that third layer needed sauce, so I used about half the jar of that vegan roasted pepper sauce.

I spread extra Pecorino Romano on top, and added some dried Italian herb mix. Oregano, basil, thyme. Slow cooked covered in the oven while the 49ers beat the Panthers. Uncovered at a slightly higher oven temp to brown the top.

We will get two meals from this dish. It has a kick to it, from the hot Italian sausage and the peppercorn pasta.

My next foray into lasagna will probably be a butternut squash dish, to use more of these great noodles.

I will head back to Secolari to try their olive oils next. Thanks to HowChow for his post that reminded me they had opened at the Mall.