Literally and figuratively. It is dreary and rainy, and since Tuesday I have been battling one heck of a head cold. Thankfully, even though nothing tastes very good, having that stocked freezer has made it bearable. And, kept my husband fed.

I didn’t blog about my CSA and Friends&Farms pickup very much. I really did minimal work to put it all away, and went back to my soups and my tea with honey. Local honey, even. See, you can be a locavore while sick.

Today I feel somewhat back to normal, but the weather outside is so crummy, I just still want to hibernate and make something warm and comforting.

Best advice to those who want to minimize work while feeling awful. Freeze some soups. Those turkey drumsticks from the local farm, Maple Lawn, made the basis for one dinner and two lunches this week.

I was originally going to pull out the cauliflower leek soup I made a while back, but, for the first time in four years, I had a Mason jar crack in the freezer. Luckily, it kept intact and was easy to dispose. I am really careful about not overfilling but this one just “popped”.

While in my clean up mode to check the baskets that hold my soups, I inadvertently left one out. A chunky tomato sauce. Found it a few hours later. It was happily defrosting, so it became chili last night.

It was that pint of sauce, a couple of peppers and onions, the last of a hanger steak made early in the week before I got this cold. I had planned to do fajitas again, but this was easy. Chopped the steak into cubes. Added it to the pot, with a can of Harris Teeters organic chili beans. Spices. I make ahead a chili fixing mix of dried spices. It simmered in a pot while I watched the news and we had another freezer-provided simple meal.

But back to the food we got Thursday that I now have to use. Having little appetite doesn’t help in the food department. Here’s how I am coping with it.

Friends and Farms individual basket is definitely manageable. The onion went into the chili. The apples were baked (super simple, halve, core, season with butter, maple syrup and nutmeg, bake). The Asian pears are ripe enough for my husband to snack on. The rosemary, will become seasoning for some lamb tomorrow night. The green beans were steamed and eaten with dinner, the night we had some smoked kielbasa, steamed cabbage, beans, and the apples were dessert. The greens, of course, the lunch salads around here which make greens disappear quickly.

I didn’t photograph the chicken breasts or the pork chop or the half pound of smoked bacon and eggs. All put away too fast.

I now need to deal with the CSA surplus, because here is where I got more than we can use. Feeling rotten and eating just a cup of soup doesn’t put a dent in that haul. 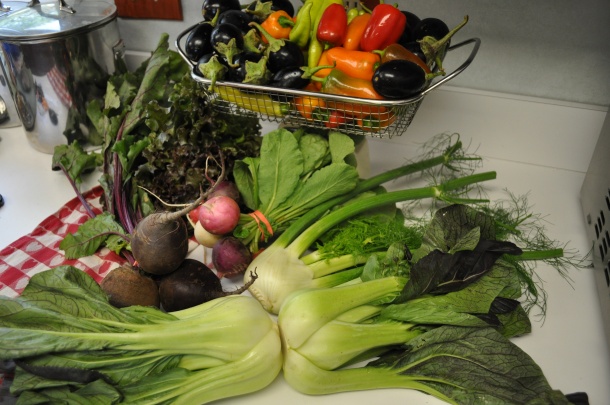 It may have been many baby veggies, but it was still quite a large quantity.

I am thinking of making hummus with some of those baby veggies as flavor. Eggplant and peppers. Besides that, cut, blanch and freeze the mixed sweet peppers. Roast those beets for salads. Shave fennel into salads.

I may have to cry “uncle” and give away a few items. I rarely get to that point, as we can make use of most of what we get. Being retired and having lunches and dinners home the majority of the week, that’s how we do it.

I do know that when the fall CSA ends just before Christmas, I will be very glad to have that stash in the freezer, to tide us over until the next season begins.