Busy week. Making scones for the first time. Harvesting spring onions in the garden, aka scallions. And, cooking with Indian spices tonight.

Let’s start with the scones. Made for the Mother’s Day event that was canceled. At least I only made the test batch before we got word that predicted heavy rains for today would make it potentially abysmal in the gardens. Turns out the rain was about an hour later than predicted, but we all know about those weather people. Not to be trusted, or believed. (Just kidding, it is hard around here to figure out the weather patterns).

As for those scones. 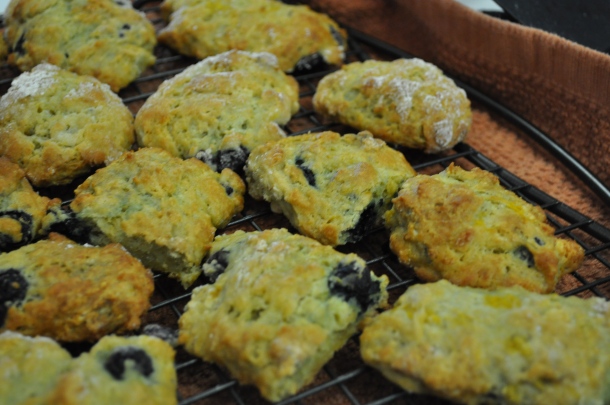 One cup yogurt and one cup fruit. I used defrosted blueberries and peaches, from my Larriland picking last summer. These were added to the other ingredients at the end. I started out with 3 cups AP flour, 1/2 cup cane sugar, 2 tbsp. baking powder and 1 teaspoon baking soda. One stick of very cold unsalted butter added to these and mixed until the texture of a cornmeal. Dump in fruit and yogurt. Bake at 350 degrees for 15 minutes. Sprinkle with powdered sugar.

Next, let’s talk about the garden, and the newly harvested scallions.

I was thinning the white onions today. Took out three scallions that will grace the dinner table tomorrow. My first items this year.

Spiced chicken with yogurt sauce. I started out with a recipe but didn’t really follow it at all.

Except sort of, for the yogurt sauce. Easy to make. Big on taste. 6 ounces plain full fat yogurt. One lemon, juiced and zested. One tbsp. cilantro, chopped. Couple of shakes of ground ginger. 1/2 tsp. garlic powder. Salt and pepper to taste. Mix together. Put on everything! This stuff is incredibly tasty.

I had leftover chicken breast, cut into cubes, or strips, or some of each. About 8-10 ounces of chicken. Made a dry rub. Tsp. of cumin. Tsp. of coriander. 1/2 tsp. of paprika. 1/8 tsp. of cinnamon. 1/4 tsp. ground cayenne. Two garlic cloves, minced. Lemon juice and zest. Salt and pepper. Mix with chicken, then cover in olive oil and bake for about 10 minutes at 350 degrees (if it was already cooked chicken). With raw chicken, this would need 20 or so minutes at 400 degrees.

Serve with whatever bread you have to sop it up. I used the olive bread from The Breadery.

Serve it also with a wine that can stand up to the heat of the cayenne. I used a Traminette from Big Cork.

Let’s see what sort of goodies I can make tomorrow with those chicken thighs in last week’s basket.

Retired, I am following my dream of living in quiet west Howard County, a rural oasis, not far from the urban chaos, but just far enough. I love to cook, bake, garden, and travel. I volunteer at Howard County Conservancy. I lead nature hikes, manage programs and show children all the wonders of nature, and the agricultural connection to their food.
View all posts by AnnieRie »
← Themed Baskets
Market Strategies →